Home l Blog l How Are Garbage Bags Made?

How Are Garbage Bags Made?

The humble garbage bag doesn’t get given much thought, but it is used daily in every human-inhabited building across the globe. Schools, hotels, office blocks, commercial facilities, homes, apartments, hospitals, you name it; a garbage bag or bin liner will be found!

Who invented the garbage bag?

A Canadian gentleman named Harry Wasylyk from Ontario, Canada, and his mate and fellow inventor Larry Hanse designed the garbage bag in 1950. Initially, the bags were intended to be only used in hospitals to protect from bacteria, germs and the breakout of Polio. However, soon enough they were found in households across Canada and the business was bought out by a corporation and sold under the brand name GLAD in the 1960’s. GLAD is now one of the largest global distributors of plastic bags of all shapes and sizes and one of the most recognisable household brands in the world.

Since then has served as a loyal servant, keeping our rubbish together, sealed, protected from smelly garbage juice leaks and heading to landfill sites across the globe. They are generally made with polyethylene in different densities, sizes, colours and styles depending on the required need. Anything from your white office bin liner to industrial strength bags for building sites or factories

The manufacturing process of a garbage bag

Garbage bags start life as a bunch of thousands of hard plastic pellets. These polyethylene pellets are measured out and the heated at a sweltering temperature of between 180-240 degrees. Once the pellets begin to melt, it’s mixed with other active agents and desired colours to create a flexible liquid plastic.

Once the correct consistency is achieved the liquid plastic material is blown into a machine designed to mould the plastic into a large tube shape. This process stretches the material to the desired thickness and density required. As the cold air hits and stretches the plastic into a tube shape, the material starts to cool and become plastic. This is where the liquid formula begins to look like a common garbage bag product that we recognise today.

When the material has cooled sufficiently, specialised machinery then flattens the bag shape, and long ‘tubes’ of plastic are put on large rollers. From there, the plastic tubes are put on to another machine, which cuts the tubes to the desired size, and perforations are punched. The ends of each bag are sealed, optional drawstrings are added and voila! You have your garbage bag!

So there it is, the humble garbage bag has an interesting story behind its invention and a fascinating production process. Take a moment to think about how your garbage bag reached your home, the next time you line your bin! 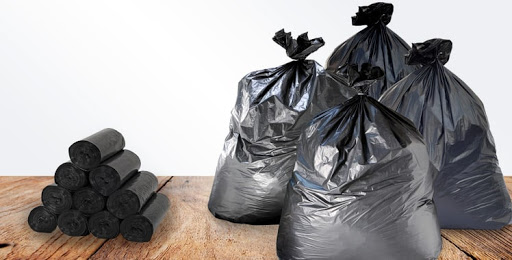